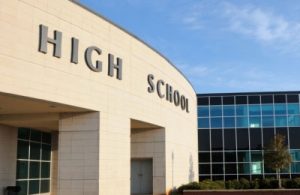 Both middle school and high school are learning institutions or environments fraught with classrooms and lockers and cabinets which these students use to sit and to keep their books while attending lessons. The hallways are filled lockers and students ready to learn new things.
In both the academic environments, there are co-curricular activities such as games and sports with their own calendars apart from the academic calendar. There are fields and playgrounds for games such as Football/Soccer, Basketball, Netball, etc.

In both the learning environments, there are teachers and tutors who lead and guide these young teenagers in their quest for knowledge. They are tasked with teaching these young ones new knowledge based on the curriculum for the specific levels. They will come to class, teach and give assignments which they will collect after a period of time for assessment.

In both environments, both teachers and students have their leaders who show them the right way to conduct themselves. Teachers, for instance, are led by the School Principal while students, on the other hand, have the School President who is in charge of his fellow students.

In both the environments, there are set regulations and code of conduct which guide the behaviour of both the students and teachers while they are within the school precincts. These regulations are intended to promote peaceful co-existence between teachers and students. Should anyone breach against any of them, punitive action is meted out against the culprit, sometimes including expulsion.

High school is actually the transition stage for a child from his teenage to young adulthood. It is here that they begin to experience somebody changes that if not well controlled may lead them to make the wrong choices in life. At this puberty stage, they will try out a lot of things in order to help them discover themselves. Sometimes, it’s out of peer pressure. Some may end up in drugs while others may make great sportspersons.

Though both are learning environments, they also differ in various aspects. Middle school normally involves young children who have not advanced to their adolescence stage. They are of younger age and cannot make any major decisions for themselves. On the other hand, High school involves children who are in their adolescent age and are capable of making some decisions that may impact on their future plans; e.g. the career or course they intend to pursue in College.

With their hormonal changes, they begin to discover themselves and can enter relationships with their fellow students. To assist them in self-identity process, high schools normally encourage them to join interest groups and clubs for self-development. It also at this level that they will discover they have rights. They will always challenge any laws that try to circumscribe their freedoms by speaking out aggressively or sometimes even organizing go-slows and boycotts.

In conclusion, both Middle school and High school have numerous similarities just as differences. However, the fundamental differences are typically visible in the child development necessitating a difference in the school structure.